Johnny Mata, charged with murder in a Baldwin Park gang shooting, was released from the Los Angeles County jail system last month because of a clerical error, sheriff's officials say. 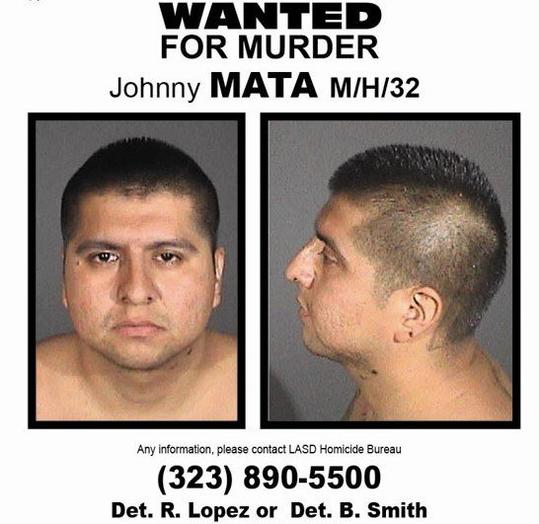 An inmate charged with murder in a 2010 Baldwin Park gang shooting was mistakenly released from the Los Angeles County jail system last month because of a clerical error, sheriff's officials revealed Friday.
The department waited nearly a month before alerting the public that Johnny Mata was on the loose.
Mata was set free April 4 from the Sheriff's Department's Inmate Reception Center in downtown Los Angeles, according to Capt. Chuck Antuna.
"A clerical error occurred and he was released," Antuna said.
The Los Angeles County district attorney's office had filed murder charges against Mata, but a processing clerk had not entered a "hold" for Mata in the computer. Antuna said he was not sure exactly when Mata entered the jail system.
At some point, a different murder charge had been dropped against Mata, he added, but it was not clear if that played any role in his release.
The department's Major Crimes Unit has been searching for him.
Nicole Nishida, a department spokeswoman, said it did not immediately reveal Mata's release because the unit was chasing leads to find him.
The department opted to go public when it exhausted those leads, she said. Sheriff's officials have now notified "all of Los Angeles County law enforcement' to help them locate Mata, she added.
Steve Whitmore, a sheriff's spokesman, said the error occurred due understaffing and the positions have since been filled and an additional supervisor added. “It no is excuse but sheriff has insured it won't happen again,” Whitmore said.
Nishida said Mata has been charged in the killing of David De Anda, who was shot Dec. 24, 2010, in the 13200 block of Francisquito Avenue in Baldwin Park.
According to a sheriff's news release, De Anda was standing with two other people in a driveway when a man approached and shot him several times in the upper torso.
He was taken to Los Angeles-USC Medical Center, where he died about two hours later, a detective told The Times.
Mata has brown hair and brown eyes. He stands 6 feet 1 and weighs 197 pounds.
Anyone with information regarding Mata is asked to call sheriff's homicide detectives at (323) 890-5500.


BAILNOW BAIL BONDS IS ALL OVER CALIFORNIA! - CHECK OUT A FEW OF OUR CALIFORNIA LOCATIONS!