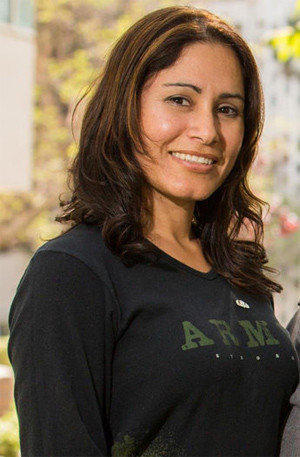 The roommate of Maribel Ramos is expected to appear in court Tuesday on suspicion of murder after the missing Army veteran was found dead Thursday near Modjeska Canyon in Orange County, authorities said.
Ramos, a 36-year-old Cal State Fullerton student just a few weeks shy of graduation, had been missing since the first week of May. Orange police said a body found in the brush Thursday in unincorporated Orange County near Santiago Canyon Road and Jackson Ranch Road was identified as Ramos after an autopsy.
Authorities on Friday announced that they had arrested her roommate, Kwang Chol "KC" Joy, 54, in connection with the slaying. Joy voluntarily submitted to an interview with detectives after he was contacted Friday morning, and was later arrested on suspicion of killing Ramos, officials said.
He is being held in lieu of $1-million bail and is scheduled to be arraigned at Orange County Superior Court’s Central Justice Center in Santa Ana on Tuesday.
Ramos’ death has stunned Cal State Fullerton, where she was a well-known member of the campus community.
Cal State Fullerton President Mildred Garcia released a statement calling Ramos "a wonderful role model for our students" who will be deeply missed.
"Maribel was a beloved student and military veteran who was actively engaged here on our campus and in the community," Garcia said. "We honor her for her past service to our country as an airborne paratrooper in the Army and her commitment to her education. We continue to offer our support to her family and friends during this exceedingly difficult time."
Police declined to release additional information, saying the case was being submitted to the Orange County district attorney's office.
Ramos served in the Army for eight years, including tours in Iraq and South Korea, before she was honorably discharged in 2008. She was a few weeks shy of receiving her degree in criminal justice from Cal State Fullerton.
She was last seen May 2 on video from security cameras at her Orange apartment complex, authorities said. The next day, she failed to show up at a veterans event at which she was scheduled to speak, then missed a softball game she had played weekly with one of her cousins for years.
Friends and relatives said it was out of character for her to walk away from her commitments without telling anyone.
"She doesn't do anything like that," cousin Frank Campos said before the body was found. "She's not the type of person to get up and go. There had to be something."
After there was word that a body had been found, many commented that they were holding out hope and offering prayers that it wasn't Ramos. But by late Friday, hope gave way to mourning and condolences.
"She had been on my mind since we first heard," wrote one of the nearly 150 people who had posted messages to her family on Facebook. "May the angels surround her and God give you peace, may she rest in peace."

BAILNOW BAIL BONDS IS ALL OVER CALIFORNIA! - CHECK OUT A FEW OF OUR CALIFORNIA LOCATIONS!